What did Li Nanxing chiong for once Phase 2 started?

He made a name for himself flipping poker cards as his iconic character Yan Fei in the 1990s drama series The Unbeatables, but these days Ah Ge Li Nanxing has been flipping something totally different in recent years — woks and pans.

The 55-year-old is an accomplished home cook — a hobby he started about seven years ago — whipping up from memory dishes his late mother used to cook.

And like many Singaporeans stuck at home during the circuit breaker, Nanxing spent a lot of time in his kitchen, cooking two meals a day every day, for his helper and himself.

However, he's gotten so sick of cooking that he now cannot bring himself to enter his kitchen anymore, he joked in a phone interview with AsiaOne.

So when Phase 2 rolled about, it's no surprise that the first thing the foodie did was to go to Ghim Moh hawker centre, which is near where he stays, for a very hearty sit-down meal.

"I ordered char kway teow, laksa, fried carrot cake, and rojak. My helper ordered nasi lemak also, and both of us shared five dishes. I was very satisfied," Nanxing said.

He explained that food that is delivered just doesn't taste as good as when eating it outside.

"I like our local food stalls and I enjoy seeing the hawkers cook the food on the spot and bring the dishes to the table."

Besides cooking during the circuit breaker, Nanxing also spent his days cleaning and tidying his house, as well as donating items that he doesn't need anymore.

His cleaning habit has unfortunately caused him a bit of headache.

"There was a dirty spot on my cabinet and you know what I used to clean it off? Make-up remover oil. In the end, I somehow wiped the paint off the cabinet! From a small inconspicuous spot, it got bigger and it's now bigger than my thumb. So ugly! I have to go find paint of the same colour to patch it up," he recounted animatedly.

Unlike some of his peers, Nanxing didn't hold any social media livestreams to connect with his supporters because he's not a techy person. Nevertheless, he will be appearing in a livestream this Sunday (June 28) for the online charity concert Live It Up presented by Unusual Entertainment and mm2 Entertainment.

He will perform one song — which one, he hadn't decided yet.

Covid-19 has hit Singapore's shores hard and no one has been spared. It will be a long fight for our return to normalcy. To do our part in giving back to the community, we have decided to take part in this fundraising concert to raise awareness for the less fortunate, especially in such a trying time. A little goes a long way and we hope that you can do your part by donating generously! Join us on the 28th of June at 9pm for a fundraising concert organised by Unusual and MM2 on Asiaone's Facebook page. Let's all do our part in helping those in need!

The concert — which aims to support families and those who have been adversely affected by the Covid-19 situation in Singapore — will be hosted by Irene Ang and Jaspers Lai, and will feature Dick Lee, Jack Neo, Marcus Chin, Wang Lei, ShiGGa Shay, Tay Kexin, Tosh Zhang, Ryan Lian, Kok Wei Le, and Benjamin Hum.

It will be broadcasted live on AsiaOne's Facebook page at 9pm. AsiaOne is the official media partner for the concert.

Donations raised during the concert will go towards local charities SPD and Community Chest, who are providing support for peoples with disabilities, low-income families, the elderly, and vulnerable individuals who are struggling. 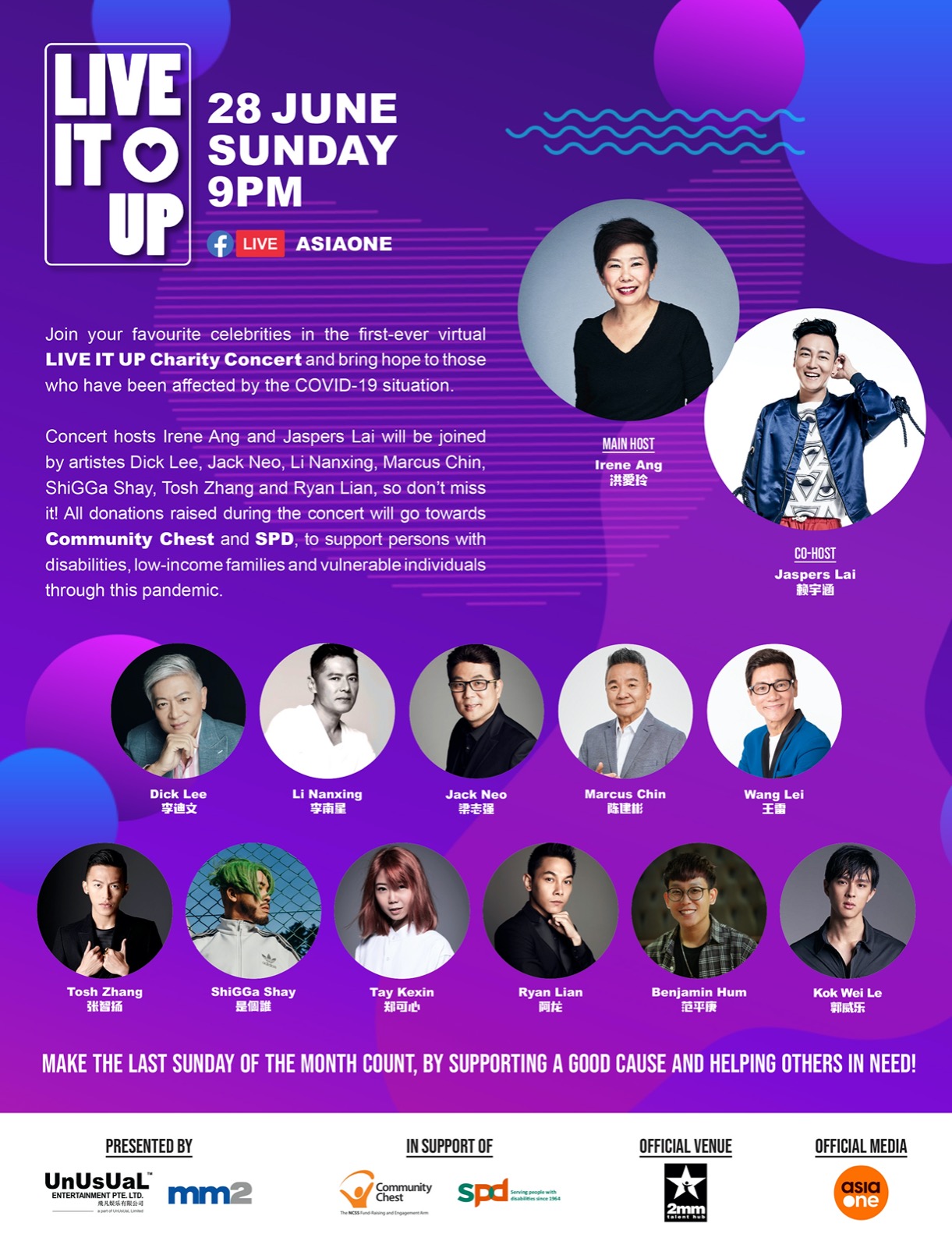 Despite his fame and current success, Nanxing is no stranger to financial struggles. He was once $2 million in debt from a failed business venture, and has also suffered from gambling and drinking addictions.

For anyone who is currently facing difficulties, he encourages them to face it and talk about it openly.

"What's most important is that you must na de qi, fang de xia," he said, meaning to be able to accept whatever comes your way.

"There are some parents whose jobs are affected (by the Covid-19 pandemic) or are not going as smoothly as before. They must be under very heavy pressure. If we can help them, their burden will be lighter."

Click on the button below to find out how you can donate to this worthy cause to help fellow Singaporeans in need.