Kim's security: Not even an ant can pass through

North Korea's leader Kim Jong Un (middle C) is escorted by North Korean bodyguards as he walks from the North to the Military Demarcation Line that divides the two Koreas to meet with his South Korean counterpart at the truce village of Panmunjom on April 27, 2018.

When Pyongyang's leader Kim Jong Un came down the steps towards the inter-Korean border on Friday he was escorted by a phalanx of bodyguards carefully chosen for their fitness, marksmanship, martial arts skills, and even looks.

Men in sharp suits and matching blue and white striped ties fanned out ahead of and around Kim, as he approached the Military Demarcation Line for a historic handshake with his Southern counterpart Moon Jae-in.

Some of the men had bulging pockets.

North Korea is one of the world's most tightly controlled societies but even so security for its leader is iron-clad. 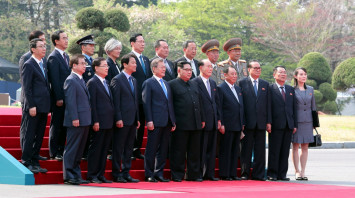 Foreigners attending any event where Kim will be present must go through hours of security procedures beforehand, and surrender all electronics, including phones.

The Guard Command, the military unit tasked with ensuring the safety of the leadership, is an elite institution close to the centre of North Korean power - it provides the centerpiece display of the annual kimjongilia and kimilsungia flower festivals in Pyongyang to honour Kim's father and grandfather.

Ri Yong Guk, a defector from the North who served on a security detail for Kim Jong Il, wrote in a 2013 memoir that as many as six different layers of security guards protected the leader on trips to the countryside to inspect military units, plants, or farms.

"It is one of the world's tightest security blankets through which even a single ant would find it hard to go," he wrote.

The arrangements for the current leader are reportedly even tighter, and during a military parade marking the 70th anniversary of the foundation of its regular armed forces in February, Pyongyang paraded three kinds of security units dedicated to protecting Kim's life.

Kim was repeatedly seen accompanied by a stout military general in uniform with a holstered gun.

The protection afforded to the Kim family was also on display when the his sister, Kim Yo Jong, visited South Korea for the Pyeongchang Winter Olympics, accompanied by tall bodyguards with crew cuts, sunglasses, and earphones.

Former United States president Bill Clinton once described the Demilitarized Zone (DMZ) that divides the peninsula and where Friday's historic summit was being held as "the scariest place on Earth".

Despite its name, the DMZ is among the most heavily fortified areas on the planet.

Around 50 kilometers (30 miles) north of the South Korean capital Seoul, the four-kilometer-wide space stretches for 250 kilometers across Korea and bristles with electric fences, minefields, and anti-tank barriers.

At the joint security area at Panmunjom the two sides, technically still at war, come face-to-face, with stern South Korean guards - also chosen for their height and looks - standing stock still only meters from the North Korean positions.

Soldiers are permitted to carry only sidearms in the area but it is an open secret that both sides have larger weapons stashed nearby for use in case of emergencies.

In November, a North Korean soldier defected under a hail of automatic rifle fire from his comrades.

Back in 1984, a 22-year-old Soviet tourist bolted from North Korea to South Korea at Panmunjom, triggering a gun battle in which three pursuing North Korean soldiers were killed, along with a Southern trooper, although defector Vasily Matuzok was unharmed.