Getting appointed as the Leader of Opposition (LO) comes with bigger responsibilities and with that, better perks — like having one’s salary as an elected MP doubled.

As such Workers' Party chief Pritam Singh announced on Tuesday (July 28) that he will be contributing 50 per cent of his additional salary (which works out to about $96,000 a year) to his party, community funds, programmes, as well as worthy charitable causes.

“He did not make his own donations a political point,” Cheng wrote of the late Lee.

Cheng maintained that Singh’s so-called “political theatre” is “designed to poison his political opponents and divide the electorate,” and it is often seen in “broken democracies”.

“LEE KUAN YEW AND POLITICAL DONATIONS” "This is to give you an idea of what my market value is worth," said Lee Kuan...

When questioned in the comments sections, Cheng replied with some pretty odd answers.

As for Ho, she made a vague Facebook post on July 29 that seemingly questioned Singh’s actions, stating that many people donate quietly without making any public announcement.

Like Cheng, the prime minister’s wife received a bit of backlash in the comments section. 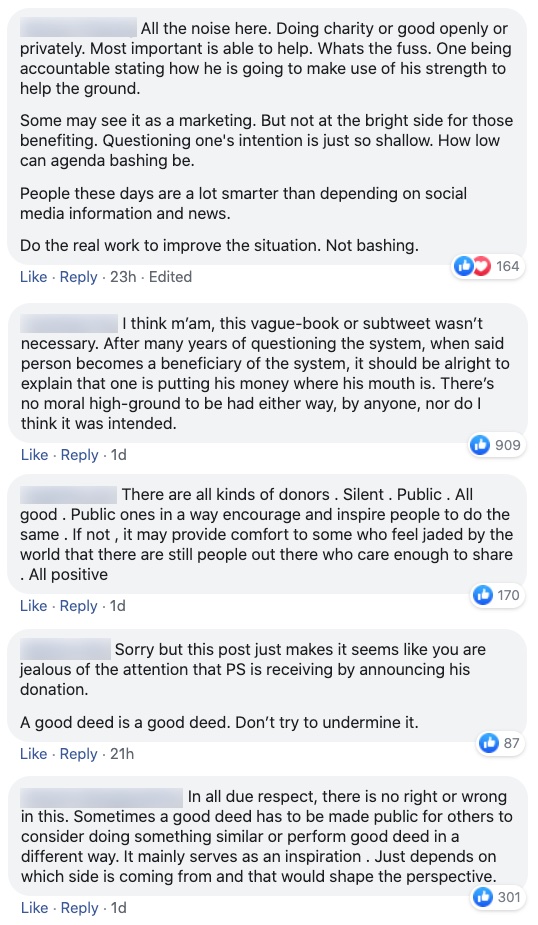 Today (July 30), she made her standpoint clearer by stating: “We are cheered by all forms of giving, including those who do it for virtue signalling.”

She asserted again that there are “clearly many more who give quietly in all sorts of ways, to all sorts of good causes”.

Cheng and Ho aren't the only public figures to comment on Singh's actions. Local writers Loke Hoe Yeong and Joshua Ip have also issued their own takes on the kerfuffle involving Singh’s philanthropic declaration.

Members of Singapore's Parliament have been giving away large chunks of their allowances for a long time. - Tin Pei...

I am baffled at the hue and cry from some quarters about Pritam Singh donating half of his new Leader of the Opposition...