Large cracks are also showing on many concrete pillars and beams along the corridor.

SINGAPORE - Concrete has fallen off two pillars and exposed the reinforcing steel beams along the fourth floor corridor of Block 915 Tampines Street 91, causing worry among residents that the falling concrete could injure passers-by.

Large cracks are also showing on many concrete pillars and beams along the corridor, which has six units, reported Chinese evening newspaper Lianhe Wanbao on Thursday (Nov 19).

A resident of 20 years, who declined to be named, told Wanbao that he noticed concrete falling off the pillar in front of his flat and onto his shoe rack earlier this year.

He said his family did not think much of it initially but their concern grew when they noticed cracks showing on many of the pillars in recent months.

The resident also said that falling concrete could hit residents walking along the corridor or even injure people walking downstairs.

In response to queries from The Straits Times, a Building and Construction Authority (BCA) spokesman said on Thursday that the cracks on the pillars do not affect the overall structural integrity of the building.

The authority added that it had inspected the affected block after being alerted to feedback on Tuesday, and has since instructed the town council to carry out the necessary rectification works.

Tampines Town Council told ST that they have gotten in touch with the residents and "arranged for necessary rectification works".

The town council added that the block is due to undergo repair and redecoration works next year.

"Nevertheless, we will be inspecting the blocks in the vicinity to prevent a similar occurrence from happening," it said. 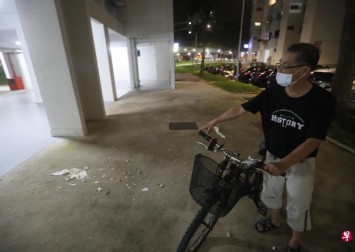 The affected block is 37 years old. According to Wanbao, the other floors do not face issues of concrete falling or cracks forming on pillars.

Another resident of the same block, who wanted to be known only as Mr Lee, said there are also cracks forming on the ceiling of his unit, which he has repaired multiple times over the last three years.

The 64-year-old, who works in the security industry, said he had previously spent around $6,000 to repair the ceiling but cracks emerged again this year.

He added that the cracks in the ceiling have caused a shift in downward pressure and he is unable to fully open one of his sliding windows as a result.