Joshua Wong, the student leader who became the face of Hong Kong's Umbrella Movement democracy protests in 2014, was released from prison on Monday (June 17) morning.

His release comes a day after organisers said two million people took part in a protest march in the heart of the city against a controversial extradition Bill and called on Mrs Lam to quit. Police said the figure was 338,000 at the peak of the protest.

"I will join to fight against this evil law," said Mr Wong, 22, who was one of the leaders of the 2014 "Umbrella" pro-democracy protests that blocked major roads in the city for 79 days.

"I believe this is the time for her, Carrie Lam the liar, to step down."

Before he was jailed, both Mr Wong and his supporters had called on the Hong Kong government to scrap the extradition proposal which would have allowed one-off extraditions with jurisdictions with whom Hong Kong does not have a permanent agreement, including mainland China. Critics fear that the extradition Bill would be used to target opposition figures and activists and subject them to Beijing's opaque legal process. 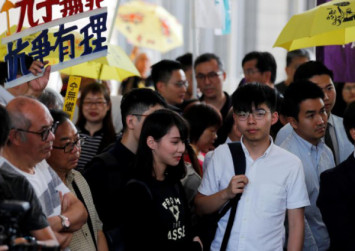 Mr Wong was just 17 when he became the face of the 2014 Umbrella Movement. In that broad civil disobedience movement, also known as the Occupy movement, protesters blocked roads and paralysed the city's financial district as they demanded that Beijing and local governments implement universal suffrage for the 2017 chief executive election and the 2020 Legislative Council elections. The city's main arteries were brought to a halt for 79 days.

The latest protests against the extradition Bill have become the most significant challenge to China's relationship with the territory since it was handed back by Britain in 1997.

While Mrs Lam delayed the Bill at the weekend, it has yet to be completely shelved, despite widespread concern that the status of Hong Kong as a financial hub could be eroded by changes to the rule of law.

"Her government cannot be an effective government, and will have much, much, much difficulties to carry on," veteran Democratic Party legislator James To told government-funded broadcaster RTHK. "I believe the central people's government will accept her resignation."

However, China's state-run China Daily newspaper said Beijing's leaders would continue to back Mrs Lam, as it lashed out at foreign "meddling" in the crisis.

China's support for Chief Executive Lam will "not waver, not in the face of street violence nor the ill-intentioned interventions of foreign governments," the newspaper said in an editorial.