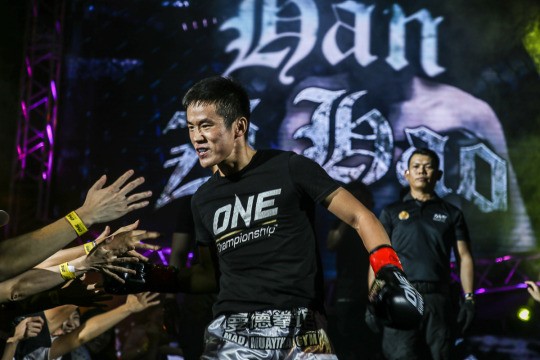 Chinese star Han Zi Hao captured his first ONE Super Series win in September, and now he plans on embarking on a winning streak with a follow-up success.

Han defeated Stergos “Greek Dynamite” Mikkios by decision at ONE: BEYOND THE HORIZON in Shanghai, China. And now the Chinese striker is all set to make a swift return to action against Ryan “The Filipino Assassin” Jakiri at ONE: PURSUIT OF GREATNESS in Yangon, Myanmar on 26 October.

Looking back on his maiden victory, Han says he is content with his performance, which saw him maintain his composure to overcome an aggressive opponent.

“My strategy was to test my opponent’s skills tentatively in the first half of the first round, then disrupt his attacking rhythm, and then take him apart, step by step,” he says.

“My opponent was very strong, but I stayed calm, and I found he was not as strong as me.”

The 22-year-old showed composure beyond his years on the big stage, though he admits nerves played a part in his maiden ONE Championship appearance.

However, the victory that followed has also helped build his confidence ahead of his upcoming bout in Yangon.

“Beating him made me feel more confident about competing at bantamweight because I used to compete at a lighter weight, and moving up made me a little bit uncomfortable,” he explains.

With his last appearance coming on home soil, Han was able to have friends and family in the crowd to cheer him on to victory against Mikkios.

The contest also served to prove to his parents that his decision to pursue a career in martial arts was a worthy one.

“Many of my family and friends came to watch me fight, which means a lot to me because I have never fought at an event like this before,” he says.

“After the bout, they were more certain of my fighting career, happy for me and proud of me. We had dinner together and chatted together. We were very happy.”

His bout against six-time Filipino Muay Thai champion Jakiri will be his third ONE Super Series appearance in the space of just over three months.

But, as one of the youngest members of a ONE Super Series roster packed with world-class striking talent, Han says is content to build his career gradually, moving up the ranks and taking an ever-increasing level of opponent as he goes.

“I want to adapt to ONE steadily, and then challenge the champion of my division,” he says.

“I will try my best to be prepared to compete in the stadium in Yangon, Myanmar on 26 October.

“My goal is to win or go home. It’s a great feeling to represent China on the international stage. I want my heart to race and get excited!”