Despite various attempts to shut them down, platforms spreading lewd content involving Singaporeans can always be found if you look at the right places. While these platforms are typically used for non-nefarious purposes, the likes of Instagram, WhatsApp and even Google Drive can be utilised to circulate illegal content — including child pornography.

With Tumblr out of the picture, the glut of local smut has since migrated to Telegram chats, which are well able to host tens of thousands of users in a single private group.

The anonymity ensured by Telegram (you don’t have to make your phone number visible) furthers the popularity of these private spaces. Members can simply hide behind handles and pseudonyms to lurk or even contribute pornographic materials involving young Singaporean women — most of which are shared without the ladies’ permission.

One particular Telegram group chat that has been blowing up on Twitter the last couple of days? “SG Nasi Lemak”, a group that holds way more raunch and obscenity than what its name would imply.

What is SG Nasi Lemak?

The group is no longer live on Telegram, but at the point of its closure, it had over 44,000 active members — a shocking number that’s made even more appalling when it was revealed within chats that there were up to 46,000 at its peak.

It would seem that the recently shuttered SG Nasi Lemak group is not even the first of its kind. Judging from its handle (@SGNasiLemak4) and other similar handles found via a global search on Telegram, this could be the group’s fourth iteration — and its biggest one. 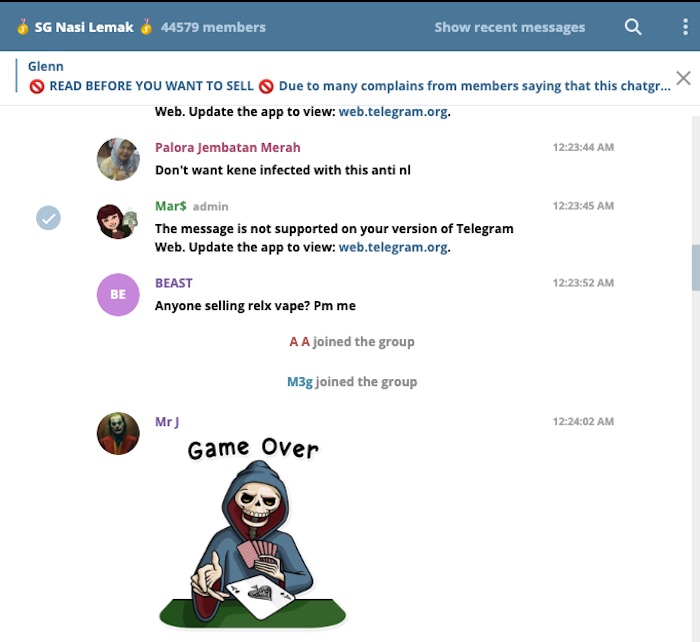 We managed to gain access to SG Nasi Lemak before it shut down and found four primary purposes of the group.

Forming the biggest bulk of the content was pornographic and voyeuristic material of women. Open sharing of nudes and lewd videos was encouraged without any prejudice to age or consent. Nudes of young Malay women were even turned into custom Telegram sticker packs. 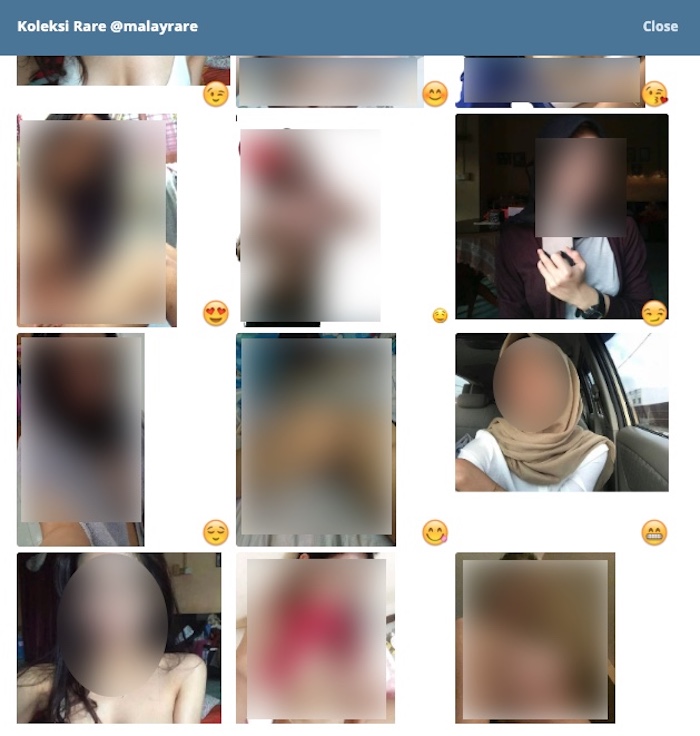 In other cases, members circulated photos of various clothed women — screenshots of their Instagram pages or grabbed from their social media profiles. One member shared some pictures he surreptitiously took of women on the MRT. 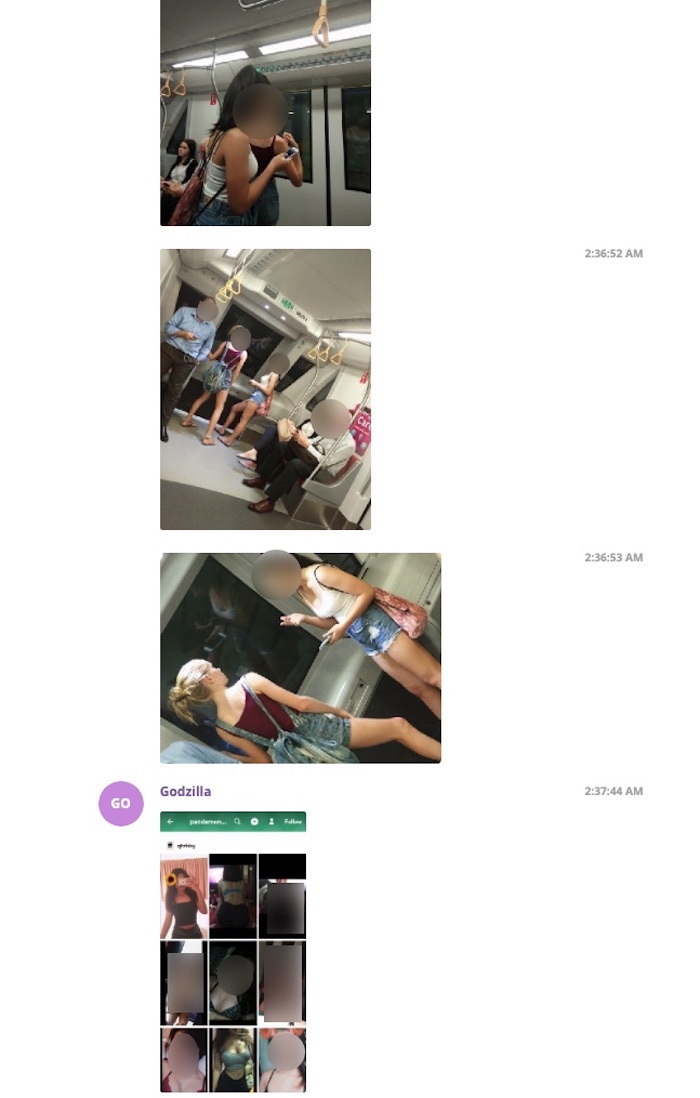 One of the group’s administrators disregarded any responsibility about the photos and videos in a dismissive post that puts the blame on the victims instead. 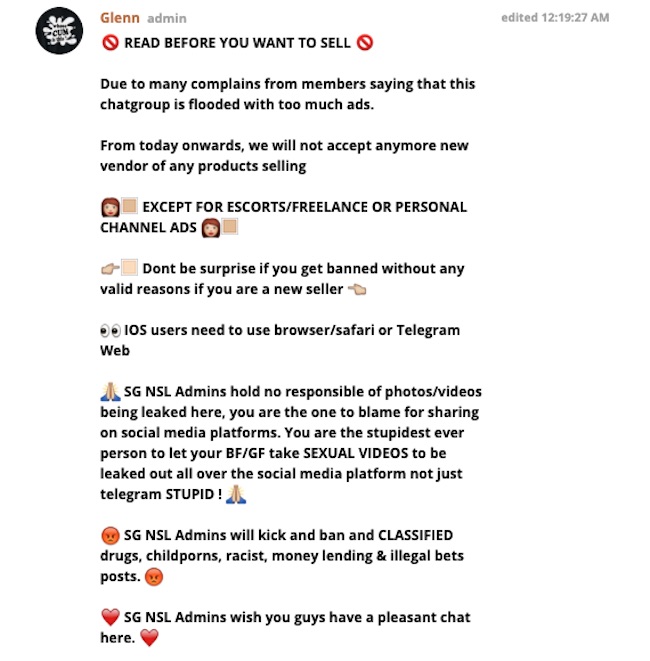 The platform is also used for individuals to sell cigarettes, vaping devices and various vaping paraphernalia — all very much illegal in Singapore. 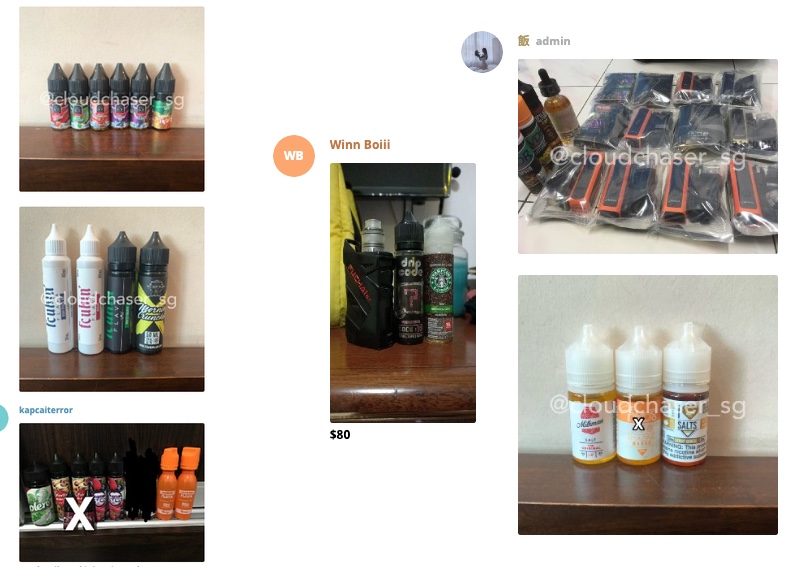 Speaking to AsiaOne, an anonymous member of SG Nasi Lemak expressed her disdain over the pornographic content, maintaining that she visited the group only to purchase vaping juices needed for her Juul e-cigarette.

Independent sex workers would also advertise their services in the group, openly stating their rates, their assets, and the locations where the deed could be carried out.

In another recurrent theme, some members sell an assortment of male sexual-enhancement drugs — the kinds that are definitely illegal. 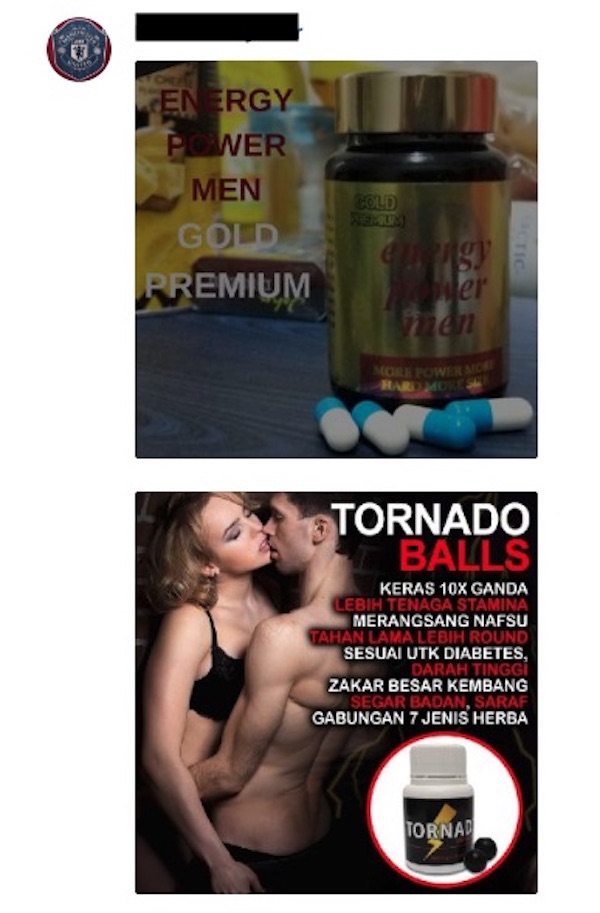 Promising fixes to erectile dysfunction and better stamina in bed, the brands being sold are not unlike the ones seen on the streets of Geylang.

Though it's unclear when the group was set up, it was only over the last couple of days that the local Twitterverse became aware of its existence. Twitter user @sajidvhhh posted on Sept 30 about her experience scrolling through the group chat’s content, vowing to expose all the members who make up SG Nasi Lemak.

Since the exposé, some women have expressed their horror after seeing their pictures being shared within the group chat.

Others conveyed their dismay over seeing known friends inside the group — including other women.

Confrontations were simply met with contempt and doubling down that the victims of the leaks are to blame. 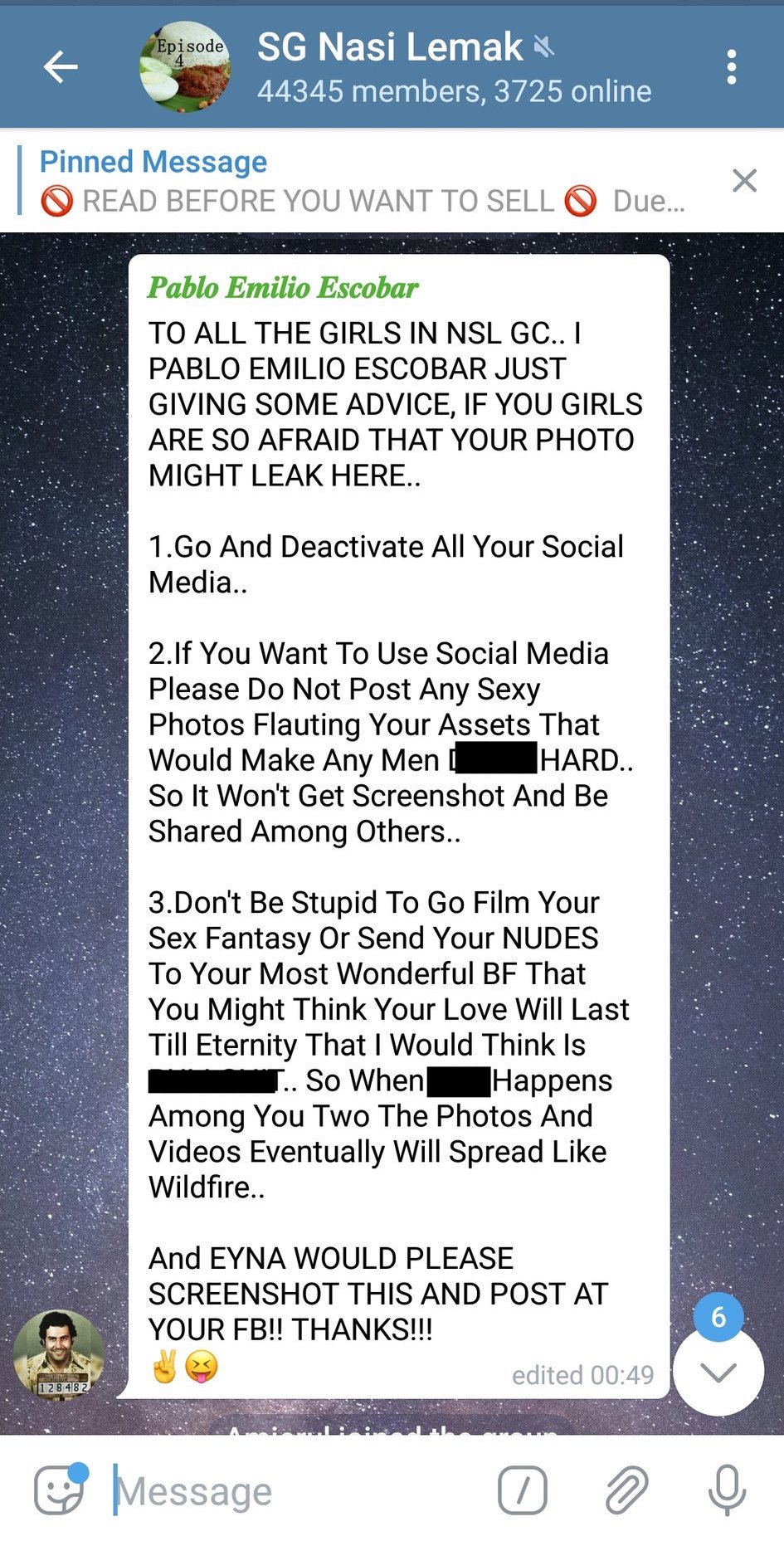 Report, closure, and the eventual revival

According to Coconuts Singapore, a Twitter user by the handle of @Eliciayeoxq mentioned that she has since filed a police report.

Since then, SG Nasi Lemak is no longer available on Telegram, though it’s unclear if the Singapore Police Force played any role in it.

But knowing the nature of internet platforms, it’s safe to say that a subsequent version of SG Nasi Lemak would emerge again in the future once the commotion has died down.

After all, the Telegram chat group SG XMM — which had a previous life as SG Telebabes — is still out there with thousands of members sharing images of uniformed school girls.

Singaporean pedophiles share images with each other on Telegram groups, have almost a thousand members from r/singapore 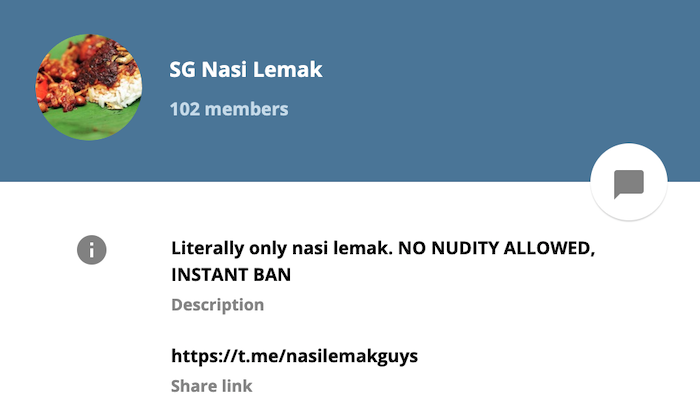 One positive offshoot that has come out from the ghastly hullaballoo is another Telegram group chat similarly titled SG Nasi Lemak. This time around, they’re taking back the name of the beloved dish — over 100 members are chatting about actual nasi lemak and where to find them. Wholesome. 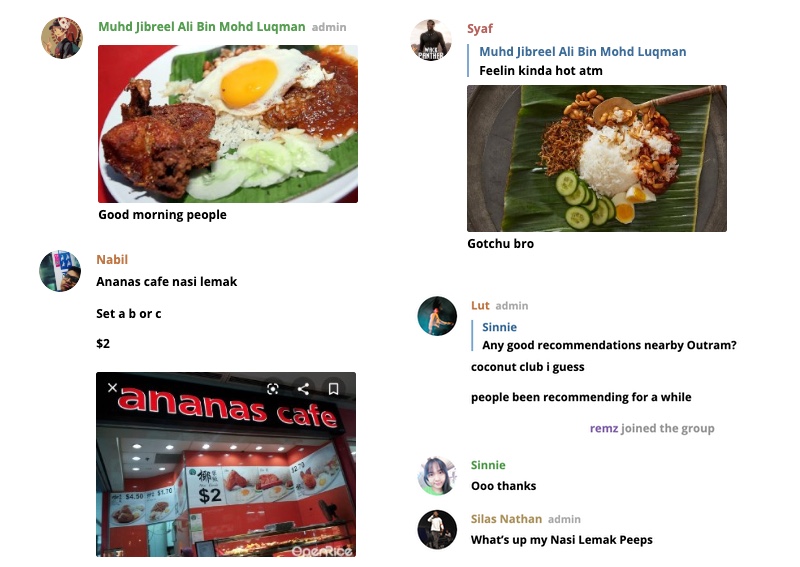