Uncertainties over masking up when dining out in Singapore: When to remove and when to put it back on?

Conversations in eateries after meals should be carried out with masks on.

Wearing a mask outside the home has become part of everyday routine over the past six months or so, but one grey area remains: When should it be removed - and put back on - when dining out?

Getting it wrong can be costly: 32 diners were fined $300 each for flouting Covid-19 safe management measures at food and beverage (F&B) outlets, the authorities said last Tuesday - some for not putting on masks after eating or drinking. The breaches were observed in eateries at Boat Quay, Bugis, Orchard Road and Tanjong Pagar.

The Ministry of Sustainability and the Environment (MSE) did not give a breakdown on the number of people fined for not wearing masks promptly after their meals, but a spokesman set out the rules.

Masks must be worn at all times except when eating or drinking or doing strenuous activity, regardless of the premises. Conversations in eateries after meals should be carried out with masks on.

"Dining out involves considerable risks because people are gathered in an enclosed space without their masks on and for a prolonged duration," said the MSE spokesman.

"While we understand that diners tend to continue their conversations and interactions after their meals, members of the public should do so with their masks on to prevent the spread of droplets."

The main driver of the spread of Covid-19 is through contact and respiratory droplets.

"Diners who breach the safe management measures will face enforcement action, such as fines, without further warning," said the spokesman.

Most of the around 130 respondents who took part in an informal Sunday Times poll online said they were aware of the masking policy but appeared to take varied approaches when dining out.

Post-meal behaviour was equally varied, according to the poll and observations at several hawker centres and restaurants.

The survey found that 43 per cent of respondents said they donned their masks immediately after finishing their food, even if their dining partners were still eating, while 34 per cent said they put on their masks only if they were preparing to leave the table, such as to go to the bathroom.

Overall, respondents seemed supportive of the rules and understand why they are required, with over 80 per cent saying it should be acceptable to remove masks only after food and drinks have arrived.

"For everyone's safety, we should continue to mask up. Look at what happened to Donald Trump," noted one respondent, referring to the United States President's recent Covid-19 diagnosis.

Others also said masking up could protect not just the people at the table, but those around them as well - including diners eating at the table nearby, or the wait staff.

But some pointed out that being fined $300 immediately for not wearing a mask promptly enough can be harsh because of the uncertainties involved.

Respondents were unsure, for example, if there was a "grace period" to mask up after the last bite of food was consumed.

They also noted that people at the same table would likely have already been socialising over the course of the meal, and questioned the effectiveness of masking up immediately.

At Whampoa Makan Place, nurse Thilagavathy Ulaganathan, 27, suggested that the authorities consider setting a grace period of between five and 10 minutes for patrons to put on masks after a meal or drink. 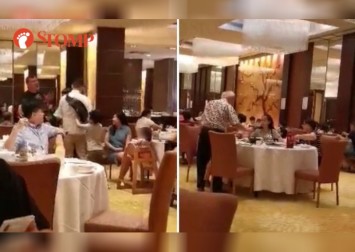 "Whoever comes with me (for meals) is probably my family or my colleagues; they're not going to be strangers. I don't think it's a big issue if they put down their masks and chit chat for a bit," she said.

"It's not very much different from when they take out their mask to eat and chit chat at the same time. The contact is not that different."

Mr Al M. Isa, a 58-year-old retired regional director, said that while people should mask up after their meals, some may choose to grab a drink after eating.

"Should people mask up and down every time they take a sip? It is a grey area. Ambassadors should also show some discretion and assess the situation on a case-by-case basis," said Mr Al, who was dining at Changi Village Hawker Centre. But overall, the mask policy is good, he said, "because you never know who may not be well".

Owners of F&B outlets said they do their best to enforce the masking policy, but pointed to various challenges along the way.

Mr Wong Jie Wen said most of the customers at his "zi char" stall in Thomson Road are law-abiding and remove their masks only when their meal or drink arrives.

He added that he had not encountered any clients who refused to don masks even after their table has been cleared.

But "not every customer is always so obedient", he said, adding that there are some who stay longer at the coffee shop after finishing their meal, but they will typically have a bit of alcohol or drink in their cups to justify their mask-free states.

Praelum Wine Bistro co-owner Gerald Lu said his staff remind guests that they should have masks on until a beverage is served. 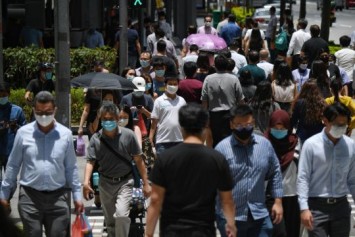 "But we have difficulties in enforcing the mask rule, as it pisses some people off, and we have had people who tell us that they will take their business elsewhere if we don't let them flout the rules," said Mr Lu.

Customers at the Duxton Hill outlet find ways to break the rules, which can put the business in a difficult position, he said.

Mr Lu noted how he had a group of 10 flout the five-diner rule by making two separate reservations and requesting tables "nearest the door".

"This creates a lot of tension. It puts the establishment, which only wants to survive, in a difficult position," he added.