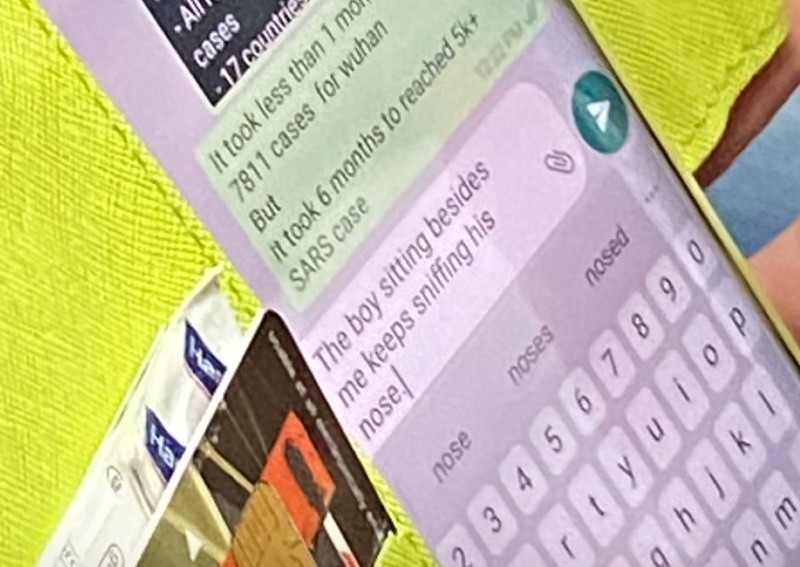 It's just like that sometimes. During a developing viral outbreak, you can’t fault people for being extra wary (though you can totally poke fun at people who are unnecessarily kiasu).

While commuting on a MRT train two weeks ago, young Elijah Tan bore witness to a complaint about him in a woman's WhatsApp chat. Because of its, er, kaypoh auntie nature, he shared the encounter on the Facebook group page “A group we all pretend to be KIASU boomers”, a satirical page where members act like Singapore senior citizens — complete with boomer-style social media verbalisms and all.

As Elijah recounted in his post, he had been seated next to a woman on the train when he noticed her writing a message about him on a WhatsApp group chat.

See, Elijah had been having the sniffles due to his sinus problems. The lady was not happy to be seated next to him, as he found out. He managed to snap a picture of her phone screen, which displayed a discussion about the coronavirus outbreak.

The woman was typing out the message: “The boy sitting besides (sic) me keeps sniffing his nose.” Big oof for Elijah.

This being a group where people act all boomer-like, the comments on his post were just as golden.

The lady hit the send button on her message before moving away from her seat, according to Elijah, so consider her safe from the sniffles. But on a serious note, do put on a face mask if you have a fever, cough, or a runny nose during these paranoia-inducing times.